Starting with "A Very Murray Christmas" in 2015 all the way to "A Naija Christmas" this year, Netflix has been busy quietly churning out festive holiday content. Tons. Of. Holiday. Content.

But how do these Netflix Holiday Originals actually perform? And is anyone really tuning in, especially when the other streaming platforms seem to own the entire beloved holiday classics catalogue — from Home Alone 1-3 (Disney+), to How the Grinch Stole Christmas (Peacock), to A Charlie Brown Christmas (Apple TV+), to name a few.

To answer these questions, we took a look at twelve Netflix Holiday Originals and how they did last December in the US, the UK, France, and Germany. So pour yourself some eggnog, get a cozy blanket, and dive on in: 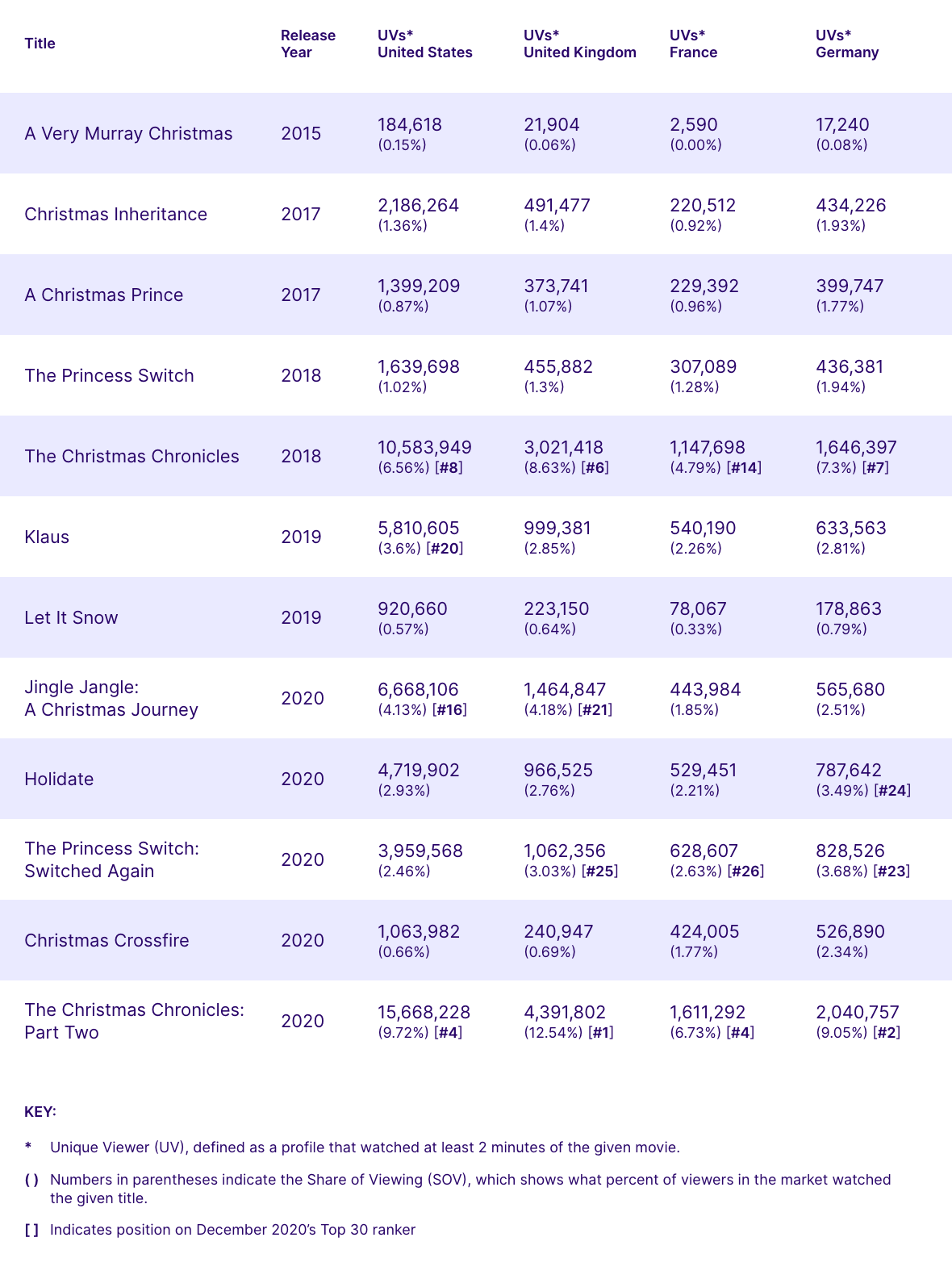 The Christmas Chronicles was a surprise hit for Netflix when it debuted on the streaming service back in 2018, and The Christmas Chronicles 2 was a home run last year — in fact, it hit the Top 4 in every market, leagues above the other holiday titles. Netflix is yet to announce Chronicles 3, but based on our data, it’s highly likely we’ll see the third movie by Thanksgiving 2022.

At the same time, is there a clear loser? And is it A Very Murray Christmas, the movie no one has heard of, albeit the only one with an all-star ensemble cast, including Bill Murray himself, George Clooney, Amy Poehler, Chris Rock, and even Miley Cyrus? And it only had 2,590 UVs in all of France last year? What went wrong here?

Holiday movies have their own seasonal viewing pattern, so they’re typically only watched during a short window each winter. Viewership predictably picks up at the end of October to steadily increase and hit a peak during the actual Christmas holiday.

And the competition for hearts and eyeballs is fierce. In this short window, the holiday content has to either: a) revive a nostalgic feeling from childhood, b) help create a new special moment with loved ones, or c) get a viewer into the holiday spirit.

The “old” classics have a decided edge here since only these movies can generate that nostalgic feeling and have been proven time and again to be tree-mendously good at ushering in the holiday cheer. Any Netflix Originals with a hope of breaking into this coveted space need to be good, Elf-level good.

Thus, a better question here is — in the short December window, how many total minutes did viewers really spend on each of these movies last year? Were audiences on Netflix tuning in to watch and rewatch the holiday content or watching something else entirely (ie, S4 of The Crown)?

Under this lens, The Christmas Chronicles: 1–2 both dominate the charts here, to no one’s surprise. In fact, Netflix struck gold building out the “12/24” spec script from Matt Lieberman around Kurt Russell as Santa and Goldie Hawn as Mrs. Claus. Critics tend to give it “mixed or average reviews,” but audiences love it. Meanwhile, A Very Murray Christmas still bombs. And the other movies all fall somewhere in between, with The Princess Switch 1–2, Holidate, and Jingle Jangle all doing well enough for Netflix to probably stretch these narratives into another movie each. Time will tell. The 2019 animation Klaus also captured significant TMVs across all 4 markets, so it’s probably safe to say that the title has entered the Christmas canon for some Netflix households, especially those with young children who might even prefer rewatching Klaus one day to A Charlie Brown Christmas. Finally, to really get the full picture — how do these numbers stack up against the Top 3 movies in each of the four countries in December last year, when comparing total minutes viewed?

The only country where a Christmas movie didn’t make the Top 3 last year was France, which had Ava in the #1 spot (Ava was also #2 in the US and #3 in the UK). George Clooney’s The Midnight Sky, which was released on December 23, managed to capture such a huge chunk of viewership in the mere 5 days remaining in December that it was #1 in Germany; #2 in France; and #3 in the US. Meanwhile, what else were audiences watching?  We recently ran an internal analysis on Netflix content most likely to be watched on TV screens. It turns out that among all the Top 20 titles most likely to be watched on TVs, audiences love tuning into Fireplace 4K: Classic Crackling Fireplace and its birchwood counterpart, Fireplace 4K: Crackling Birchwood. A real fireplace that digitally sparks and crackles — you’re welcome and happy holidays!

What are you waiting for? Sign up for a demo today to explore Showlabs.tv