Does Netflix have an Achilles' heel? And is it their slate of reality TV? This week, we take a look at the data to get some answers. And, of course, we peek at the Squid Game data.

— While productions like The Real Housewives and Top Chef have been unstoppable for the past 15 years — spawning entire franchises, successful spin offs and building their own empires — Netflix has largely failed to create anything with a similar cultural cachet in the United States.

The question is: Why does reality TV tend to not do well on Netflix? We know that talent shows, cooking shows, and dance competitions are always ratings drivers on linear TV, often competing for the choicest primetime programming slots.

This September, for example, saw the premiere of the 30th season of Dancing With the Stars, and with Tyra Banks at the helm, there’s just no stopping it. Meanwhile, The Masked Singer, which already has two spin-offs — an aftershow and a dance version — is riding the season 6 wave as we speak.

Yet, over at Netflix, global superstar Paris Hilton — arguably reality TV royalty ever since The Simple Life — dropped Cooking with Paris on August 4 to abysmal viewership numbers. Is the flop a sign that the Paris brand is waning? Or due to the series’s release strategy?

Yet, you’d expect that reality content like this would perform as well or even better on Netflix since audiences can consume the episodes whenever and however they want. Maybe it’s because Cooking with Paris seemed to not know who it was really targeting: Foodies couldn’t take it seriously, and the series lacked the high drama fix we’ve come to crave from shows like Keeping Up With the Kardashians.

If that’s the reason here, then how have other Netflix Original reality TV series been performing? We took a look at the first season of 9 new and “old” Netflix series to get some answers — and of course, we couldn't help compare them against the Squid Game data.

Here’s how the reality TV series all performed in the United States: 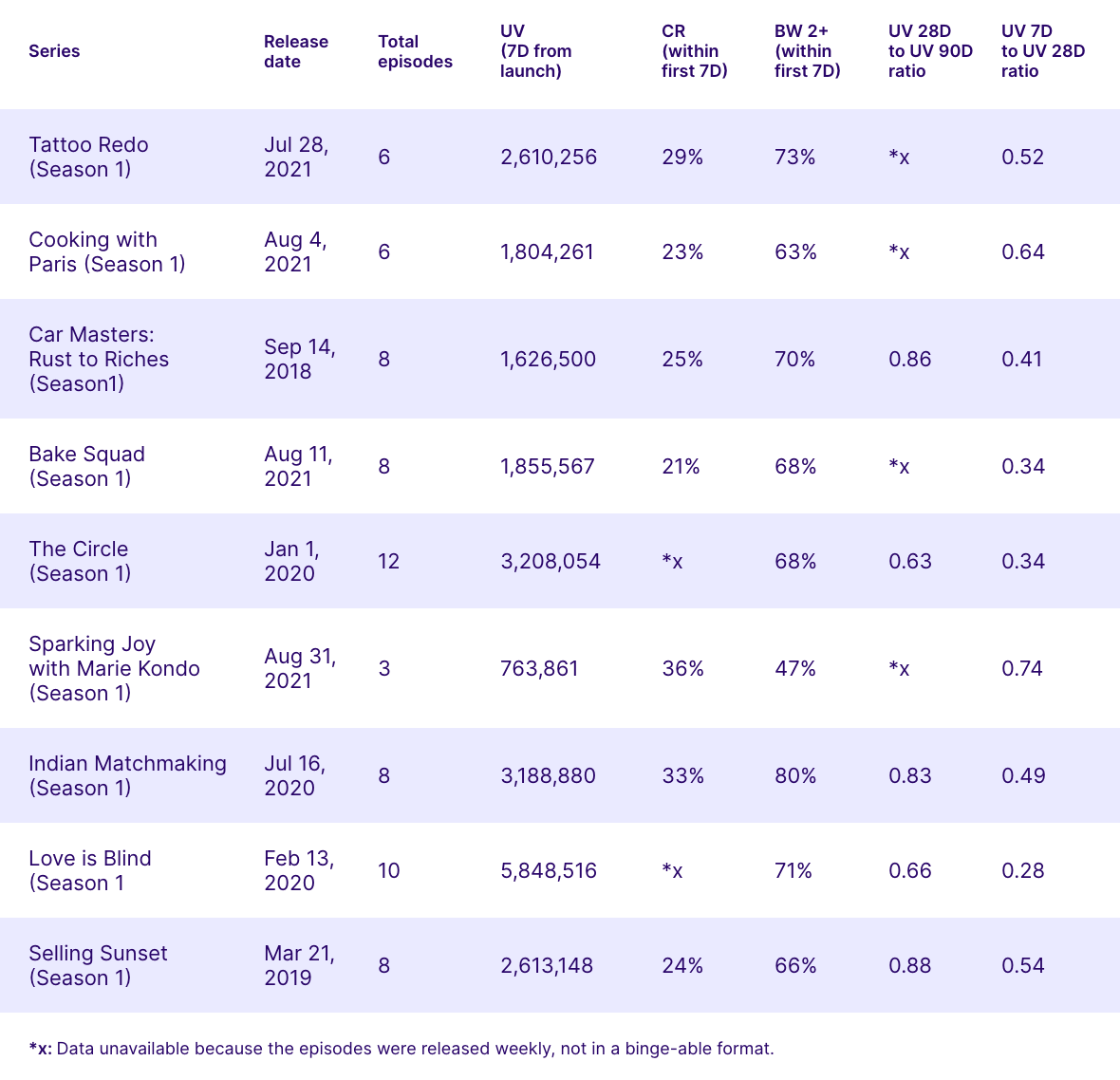 The clear winner is Love is Blind, with 5,848,516M Unique Viewers (UV) tuning in within the first 7 days of the show’s premiere in February 2020. Love was renewed for a second *and* third season on March 24, 2020, and Netflix just confirmed in September that the second season will finally premiere in February 2022. Love is Blind also has a 71% Binge Watching (BW) rate, meaning that 71% of UVs watched more than 2 episodes in one viewing session — not too shabby overall, and actually coming out near the top of the bunch.

A distant second place goes to The Circle, with 3,208,054 UVs in the first 7 days, and this show was renewed for a 4th and 5th season in August 2021 even before the third season premiered in September. Interestingly, of the 9 series on our list, only Love is Blind and The Circle were weekly releases.

Indian Matchmaking came in third, with 3,188,880 UVs in the first 7 days, and Netflix waited a few months before announcing in August 2021 that this show would be renewed for a second season. The show had a 33% Completion Rate (CR), meaning that 33% of unique viewers who watched the first episode completed the last episode within the first 7 days.

To better understand the performance of all the shows, we also took a look at the UV 28-day to UV 90-day ratio, above. How to interpret the results? If the number is below 80, that’s numerically a bad sign for the content; above 80 and the content is looking strong.

But then how does something like The Circle compare with a Netflix Original smash hit like Clickbait or the recent international phenom Squid Game? (The latter being a fun meta example because it is a series about a reality TV series…):

Here The Circle pales — Clickbait pulled in 7.93M UVs in its first 7 days from premiering on August 25, 2021. And Squid Game hit a grand slam with 11.78M UVs during its first 7 days. However, from a binging perspective, The Circle and Squid Game are almost neck and neck, with 68% and 69% of UVs watching at least 2 episodes in one sitting, respectively.

Maybe this is why Netflix has been adding major reality shows like Survivor, America’s Next Top Model, and The Challenge to its library. But, there’s a catch here: fans don’t get the complete run of these shows — just two seasons apiece, selected seemingly at random.

In the meantime, Netflix is busy casting the widest net with the launch of the largest reality casting call ever — via NetflixReality.com. Anyone can submit a video to “potentially be on one or many Netflix Reality series!” We’re excited to see what comes out of this, which surely has to be better content than watching a beaver choose between a leopard or a zombie to be his sexy beast on Netflix’s Sexy Beasts...

***
What are you waiting for? Sign up for a demo today to explore Showlabs.tv
Isabel Gardocki Avid TV Watcher