The Crown S4 is Addictive: 35% of Viewers Will Finish the Season in 7 days

What happens when Prince Charles meets a young Diana Spencer? Viewers can't get enough. In this week's deep dive, Plum applied 3 metrics to measure viewer engagement across all 4 seasons of The Crown.

In S4, E1 of The Crown, viewers are finally introduced to a young Diana Spencer, dressed as a “mad tree” from her school's production of A Midsummer Night's Dream. She shyly sparks a conversation with Prince Charles, and the rest is history. By episode 4, viewers are hooked into watching the whole season, and 86% will go on to binge 2 or more episodes in the first 28 days. How does Plum look at these metrics?

When it comes to TV measurement, all the metrics in use today were defined and standardized in the 1950s. Since then, advertisers have relied primarily on the Gross Ratings Point (GRP) to estimate audience size, and TV programmers have measured content performance using metrics like Rating, Average Time Spent, Affinity Index and Reach / Cover.

But what about the SVOD services? How can anyone really measure if a title like The Crown does well (or poorly) on Netflix or Prime Video — especially if SVOD metrics are very new and the leading services are reluctant to divulge any crucial data? PlumResearch has been working on defining and implementing our own standardized metrics that would give us these answers:

– Get Hooked: is the minimum number of episodes that a unique viewer needs to watch in order to “get hooked” on a show and complete the full season at least 70% of the way

– Binge Watching: the percentage of unique viewers who watched n+ episodes of a single season during a single viewing session

The above metrics can be applied to different levels of content, such as single episodes, seasons, entire series or movies. Also, they can be measured in a specific time after the release date, such as 7 days (7D) or 28 days (28D).

Want to see these metrics in action? Let’s take a look at how unique viewers in the UK have been reacting to each of The Crown’s four seasons to date:

***
What are you waiting for? Sign up for a demo to explore Showlabs.tv 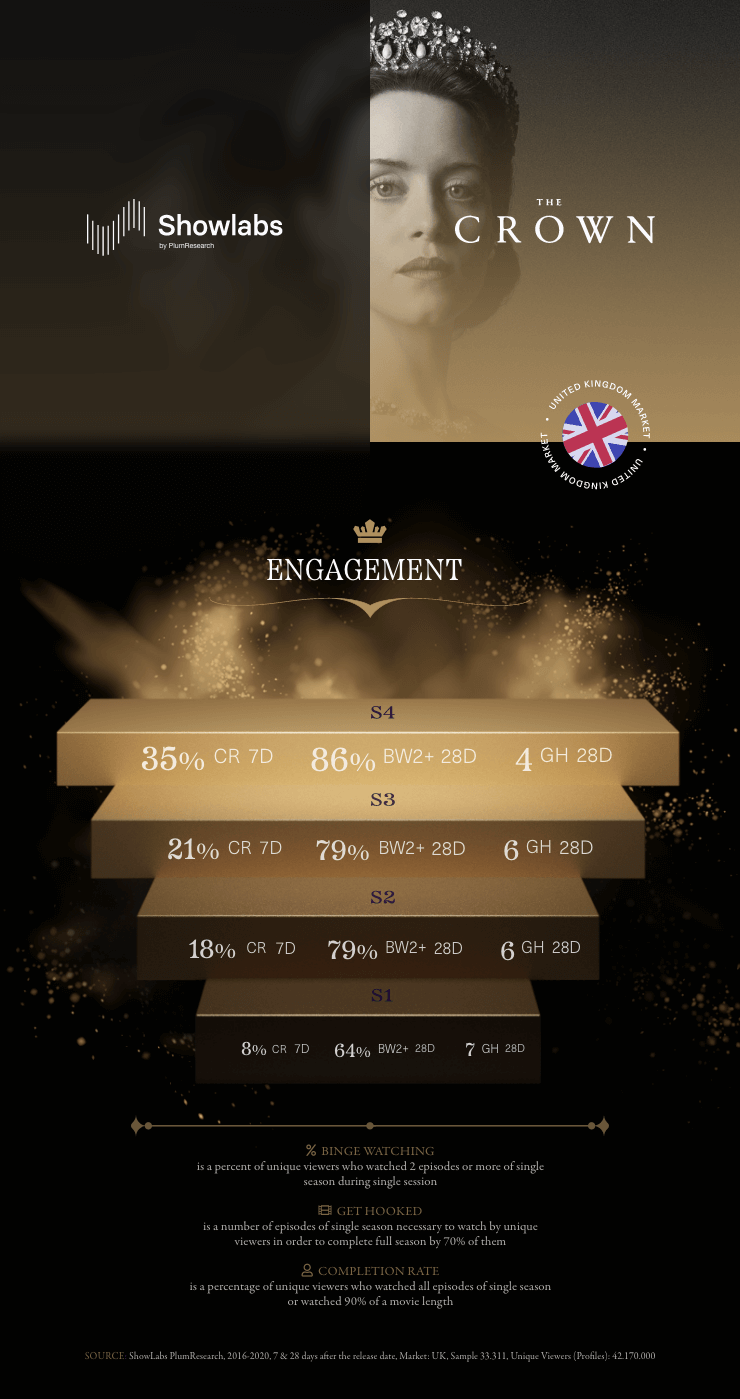